Going Beyond Just a Job

Home/Uncategorized/Going Beyond Just a Job

Going Beyond Just a Job 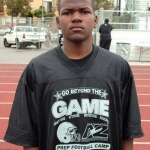 I met Mr. Jelani Shabazz, 16 years ago on the football field, during the second of 16 consecutive sport leadership camps called Go Beyond the G. A.M.E. There were about 150 youth from all over the city, as well as NFL players, but no one impressed me more than Mr. Jelani Shabazz.

My heart embraced his character, balanced thinking, sound personality, and perspective on life. He is gifted at setting, planning and achieving his goals. “I learned today that life is more than just about football, it’s about doing well in school. You can become anything after football”, said Jelani at 8 years old. I was really impressed at how he grasped this perspective at such a young age, and how was he able to frame it so well, so quickly. He figured out in a short period of time what took me years.

At that point, his father and I became good friends. He allowed me to give Jelani advice to deal with various situations socially, academically and professionally. He has grown to exceed my expectations. His decision making has been very deliberate. He is very analytical and has vision along with patience. After graduating from the University of Santa Barbra, securing a good job, he is still planning. I want this to become the new normal (the GBG impact), because currently, in California only 59% of African American males are graduating from high school. (source: www.blackboysreport.org)

Mr. Shabazz understands his self-worth and value. He wants to become an entrepreneur, but not without learning from those who have succeeded in this endeavor before him. Go Beyond the G.A.M.E. is working to help connect him to organizations that specialize in entrepreneurship training. GBG is about creating opportunities and no one displays this better than GBG alumni, Jelani Shahbazz. I pray to G-d for his success in achieving all his endeavors.