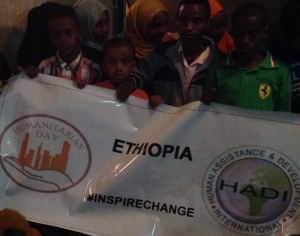 Ethiopia was one of the first places in Islamic History to accept Muslim refugees from Mekkah. In fact, Humanitarian Day Ethiopia, takes place in Hara, Ethiopia; also known as the “Walled City”. The walls surrounding this sacred city, considered “the fourth holy city” of Islam, were built between the 13th and 16th centuries. Today Ethiopia needs our help; 78 percent of the population struggles with an income below $2 a day. There are approximately 4 million orphans who face harsh conditions such as inadequate primary education, child labor, HIV, and chronic food insecurity.

Humanitarian Day Ethiopia (HDE) was founded in 2013. It is coordinated by Amana Trust, a registered NGO that oversees the placement of orphans into caring homes. HDE provides educational assistance to orphans and host an annual Iftar dinner to honor their hard work and caretakers.

On, July 5, 2015, HDE held its annual Iftar banquet serving nearly 75 guest. HDE also sponsored a full year of educational expense for one of the orphans. HDE coordinator, Logan Cochran PhD candidate, reported how much the whole community looks forward to this annual event. Logan said, “The effort is raising the awareness of Amana Trust’s excellent work with orphans”. HDE hopes the awareness will translate into more sponsorship and the enlistment of additional care takers. HDE would like to express a special thanks to HADI Foundation for its continued support of our Educate Africa initiatives.