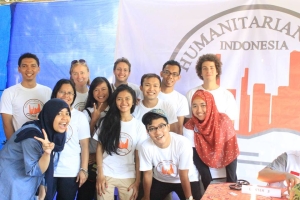 Indonesia is one of the most beautiful countries in the world. The green covered mountains separated by breathtaking natural waterfalls seem like descriptions of paradise. Along with such intense beauty, it has endured catastrophic disasters. The resilience of its people to rebuild is remarkable but not without challenges.

Humanitarian Day Indonesia’s (HDI) director, Rizka Pramadita, has been studying these trends since the first HDI in 2008. HDI has developed alliances with the Red Crescent and Gadjah Mada University students to offer disadvantage communities “Free Open Health Clinics”.
Despite Indonesia having the world’s 10th largest economy in terms of purchasing power, half of its population live on $25 dollars a month. For every 100,000 live births, Indonesia suffers from 228 infant and 190 maternal deaths. Thirty two percent of the population still lacks access to sufficient sanitation facilities. *

On, June 28, 2015, HDI held its Open Free Health Clinic, at Tejokusuman (Winogo River). The remote village had about 900 residents with 18% living below the poverty rate. The attendees were ecstatic to have HDI offer such vital service for their survival. The clinic screened approximately 100 elderly patients and about 200 children received dental and nutritional interactive workshops. HDI team is researching cost effective ways to host additional clinics throughout the year in other remote rural areas. HDI is inspiring change and demonstrating new innovative ways to service those most in need.
*http://www.worldbank.org/en/country/indonesia/overview